What is interdependency of Projects?

During the executing of project work, the entire execution may not be solely independent of external influences of external projects.

During the planning phase, it is important that a matrix of interdependencies of projects and program of work is established.

Keeping across externally dependent tasks or activities is equally important to managing tasks on the critical plan on your project. 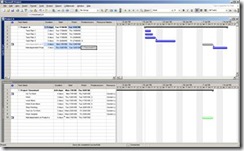 How to set Project interdependency between projects in Project Server?

In the Predecessors column type in <>Project NameTask ID where Project Name is the name of the Project to which the predecessor dependency is to be set.

The Project ID is the task ID of the task for which the predecessor relationship is to be set.

Once this has been set you will notice a ghost dependent task appear from the dependent project in your project plan.

Save and Publish the Project Plan.

What happens if the dependent task on the external project changes?

When the dependent task on the external project changes, the next time the project is opened, changes to the external predecessor task will be shown.

The user will have the option to accept the changed on dependency to the external project or if needed Delete the Link.

On Accepting and closing the dialogue box the accepted changes are reflected in the project plan.

Back to Top
We are certified Microsoft Partner providing quick, reliable and independent consultancy on business technologies, such as Office 365, Project Online, Microsoft Project Server and Microsoft SharePoint Server.